Visit the shows page for all shows

COMING SOON TO A "SALOON" NEAR YOU!

Country Rock & A Tribute To The Eagles 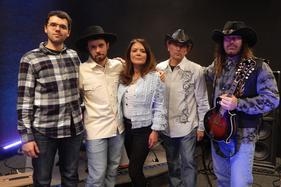 The Desperados are a 5-piece group of seasoned musicians from the Jersey Shore bringing to life the songs of Country Rock. When requested, The Desperados perform a "Tribute to the Eagles," the #1 selling band in American history.  Additionally, they perform Irish music (traditional songs and songs by Irish artists) as “The O’Desperados.”

While on a hiatus from their original rock band Idöl Threat, brothers Patrick Reiner (drums, vocals) and Robbie Reiner (guitar, vocals) were saddened by the death of Eagles frontman Glenn Frey, of whom first inspired them to pick up their instruments. The brothers were moved to form The Desperados, which honors both the music of the Eagles and the artists they influenced, keeping the soundtrack of their youth—and many others’—alive.

Country Rock is a uniquely American creation, combining folk stories with rock music inspired by the country musical traditions of Southern and Western America.  The Reiners are joined by  like-minded multi-instrumentalists, and percussionist/vocalist Maria Reiner, who all share a passion for bringing the Country Rock music experience to both new and familiar audiences alike. Audiences are moved to participate, often dancing and singing along with the band. Get ready to get on your feet and discover or rediscover your favorite songs!